Davis is seeking a Developer to design, construct, own and operate a new student housing project to be constructed at UC Davis West Village (“West Village”) to serve transfer students and other upper division students. Goals for the West Village Transfer Student Housing Project are to maximize affordability, to build community, and to provide for exceptional facility design and operations. The Project should be available for occupancy by August 2020.

Up to 30% of the bedrooms may have double occupancy. This means that approximately 1,450 bedrooms may be constructed to reach the total desired target of 1,875 beds.

The West Village neighborhood is located to the immediate west of Highway 113 and the main campus, between Russell Boulevard and Hutchison Drive. The Project site consists of approximately 22 acres located in the West Village neighborhood, bounded by Acer Street to the north, the Viridian and Solstice apartments to the east, an agricultural buffer to the west, and unimproved land to be used as a new surface parking lot to be designed, owned and operated by the University to the south. The Project site is directly adjacent to the Solstice and Viridian apartment complexes that are owned by West Village Community Partnership, LLC and operated by Greystar.

The Project site is presently unimproved. The Campus is undertaking soil sampling to determine if there is Naturally Occurring Asbestos (“NOA”) present on the Project site. The soil report will be shared with the short-listed Developers as an Addendum to this Stage 2.

All utilities are available to the site. UC Davis staff believes that utility capacities are adequate to serve the Project; however, the Developer will be expected to confirm the adequacy of utilities and will be responsible for all utility costs/fees as a cost of the Project, including any connection fees for campus utilities. Electricity will likely be served by PG&E from the north end of the Project site, while the wet utilities including domestic water, storm water, and sewer will be served by UC Davis campus infrastructure from the south end of the Project site.

UC Davis will require that the design of the Project be all electric and meet a zero net energy standard as well as all provisions of the UC Sustainable Practices Policy (See, Appendix 2) and take into account the UC Carbon Neutrality Initiative (See, Appendix 3).

The selected Developer will be required to comply with the Memorandum of Agreement Re: University of California, Davis—West Village, Department of Industrial Relations Coverage Determination Public Works Case No. 2010-024, December 20, 2013 dated January 15, 2016. (See, Appendix 20.)

As the site is University-owned, the Project is not subject to the zoning and building ordinances of local jurisdictions, including building permits and inspections. Project approvals are summarized in Subsection D., below. 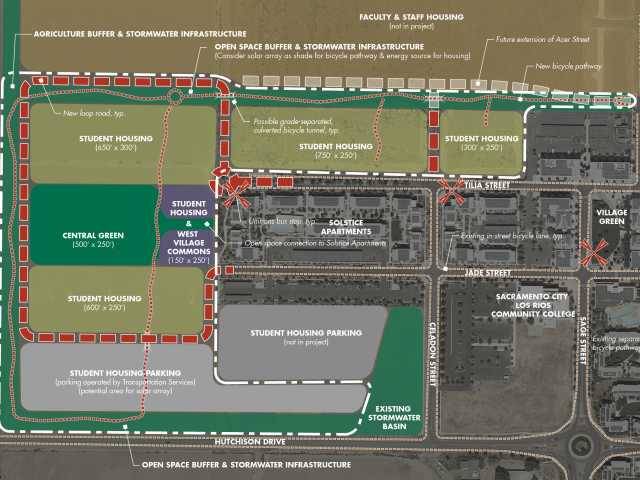